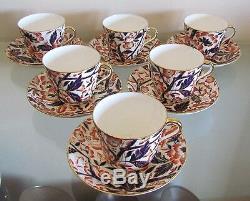 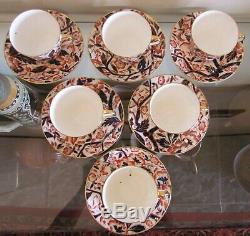 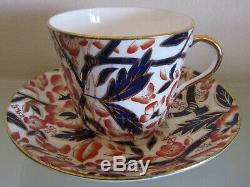 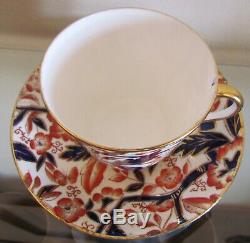 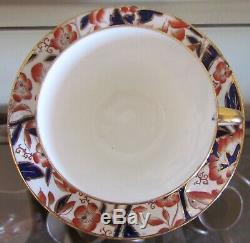 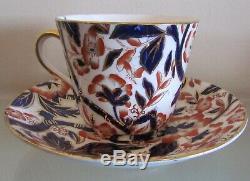 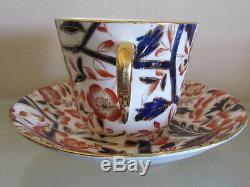 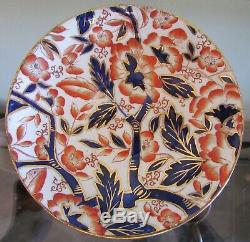 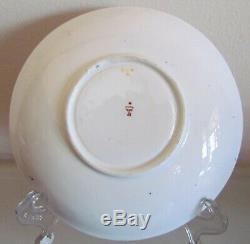 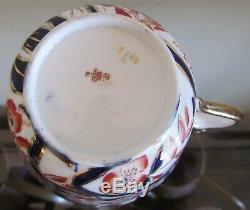 Gold, Cobalt Blue, Orange on a white ground. Top Diameter = 91 mm. Foot Diameter = 53 mm. Length = 117 mm Handle to rim. Of the cups (2) have firing flaws only on the inside, not the outside (hairline). Superb overall for items this age!! Images form part of the description.

This item is extremely delicate & requires very careful and proper packaging in order to ensure that no damage occurs. The company, particularly known for its high-quality bone china, has produced tableware and ornamental items since approximately 1750. It was known as'Derby Porcelain' until 1773, when it became'Crown Derby', the'Royal' being added in 1890. The factory closed down in the past under Royal Doulton ownership, but production was revived under the renewed ownership of Hugh Gibson and Pearson family. It was Robert Bloor who restored the Derby porcelain reputation when he took control of the factory in 1811 and began to build a team of very fine painters.

In 1815, the factory was leased to the firm's salesman and clerk, Robert Bloor, and the Dewsburys played no further part in it. Bloor borrowed heavily to be able to make the payments demanded but proved himself to be a highly able businessman in his ways of recouping losses and putting the business back on a sound financial footing. Under him Derby welcomed the return of some of the talented and creative artists.

Early traditions were recaptured and enriched. Bone china was developed, and elaborate new shapes were introduced. Lustrous and ornate adaptations of Oriental patterns were added to the traditional Derby style. Many aristocratic clients were attracted, including the Earl of Shrewsbury, Earl Ferrers, and later Queen Victoria herself. He also possessed a thorough appreciation of the aesthetic side of the business, and under him the company produced works that were richly coloured and elegantly styled, including brightly coloured Japanese Imari patterns, generally featuring intricate geometric patterns layered with various floral designs. These designs proved extremely and lastingly popular, and Derby continued to thrive. The Bloor period of management coincided with the new bone china body and use of newer heavier oil colours for decoration. These changes together with the adoption of mercury gilding, which replaced the honey gold of the 18th Century, resulted in very richly gilded, flamboyant designs known as'Japans'. These patterns were English copies in cobalt blue, iron red and gold made purely to comply with Western taste. In Japan these patterns were called'Imari', as that was the only port from which porcelain left the country. The dramatic bold colourings served to conceal the minor flaws, which would previously have made finished pieces unacceptable to customers. This meant full utilisation of kiln loads.

In 1828 Bloor succumbed to a mental illness that necessitated his retirement from management of the enterprise. The factory continued under a manager, James Thomason, until 1844 when Thomas Clarke, a relative by marriage (to Bloors only granddaughter), had Bloor declared insane and took control of the business. From 1844 Robert Bloor's daughter and her husband, were responsible for the business and fought to save it, but despite their efforts the factory closed in 1848.

For the last twenty years of his life Bloor was in an asylum. During this time the factory was under the control of John Haslem's uncle, James Thomason. The unfortunate Robert Bloor died in March 1846. The item "BLOOR DERBY BAMBOO PATTERN (Imari Pallet) 6 huge TEA CUPS & SAUCERS=c1830=RARE" is in sale since Monday, March 9, 2015.

This item is in the category "Pottery & Glass\Pottery & China\China & Dinnerware\Royal Crown Derby". The seller is "infinite_antiques_and_collectibles" and is located in Johannesburg. This item can be shipped worldwide.