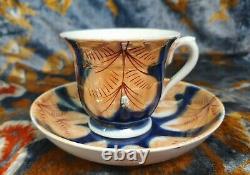 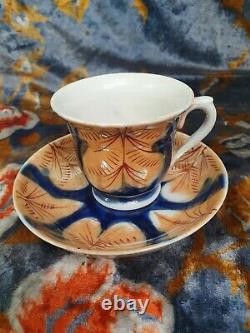 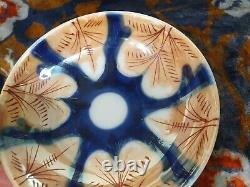 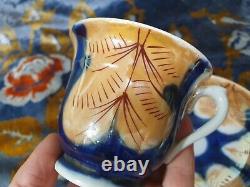 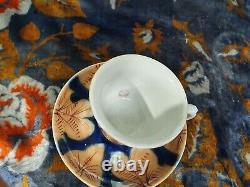 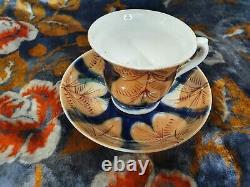 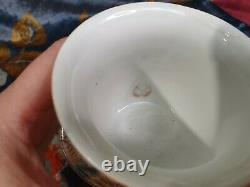 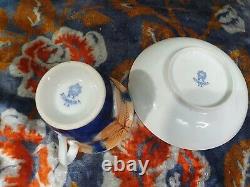 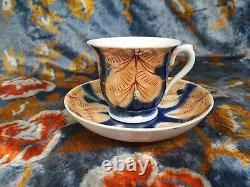 Antique Russian imperial KUZNETSOV tea cup & saucer 19th century, 1890s. Porcelain Kuznetsov cup and saucer, hand painted, chandelier. In good condition, no cracks, no chips, no restorations. There is a small yellow leaf-shaped spot inside the cup. The stain is only under the glaze inside the cup.

This is not a crack and it is not a chip. It does not affect the functionality of the cup in any way. All the details are in the photo. 1911, an outstanding industrialist and entrepreneur of the late 19th - early 20th centuries.

Founder of "MS Kuznetsov's Partnership for the Production of Porcelain and Earthenware". Apart from European Russia, porcelain and faience of the Kuznetsovs are in demand in Siberia, the Caucasus, the Transcaucasus, Central Asia, Persia, and Afghanistan.

Eastern trade deserves special mention. The partnership constantly participated in all kinds of industrial and art exhibitions. For facilitating Russia's participation in the 1900 World Exhibition, Matvey Sidorovich was awarded a high French award - the Order of the Legion of Honor.

Kuznetsov's products were awarded the Gold Medal at the exhibition in Chicago, the Grand Prix at the exhibitions in Reims and Liege. On May 3, 1902, by the highest permission, granted to the MS Kuznetsov Partnership for the Production of Porcelain and Earthenware in Moscow, as long as it is headed by Matvey Sidorovich Kuznetsov, the title of Supplier to the Court of His Imperial Majesty.

By the end of the 19th and the beginning of the 20th centuries, Matvey Kuznetsov became one of the largest manufacturers of the Russian Empire. His painters knew a special recipe for the preparation of bright ceramic paints and porcelain mass, skillfully painted products using the coating method - blue, pink, yellow, raspberry cobalt, velvet, juicy.

Gold was used to decorate expensive dishes, engraved with agate. Every detail was "read" in the fancy ornament. By the second half of the 19th century, M. Kuznetsov has become the largest supplier of porcelain, earthenware, majolica and other types of products in the world market.

"Kashgar printing", mastered at the factories of Partnership M. Kuznetsova , ousted porcelain from Germany, France, England from the markets of Persia, Afghanistan, Mongolia and other Asian countries. He invited famous Russian painters to work. It is known that at the Kuznetsov factory, although not for long, M. Vrubel, creating a sketch for painting a decorative dish based on Sadko.

In addition, Kuznetsov was awarded the Order of the Bukhara Star, the French Knight Cross and the Order of the Legion of Honor. This item is in the category "Collectibles\Kitchen & Home\Dinnerware & Serveware\Cups & Saucers".

The seller is "molecules1355" and is located in this country: RU. This item can be shipped worldwide.